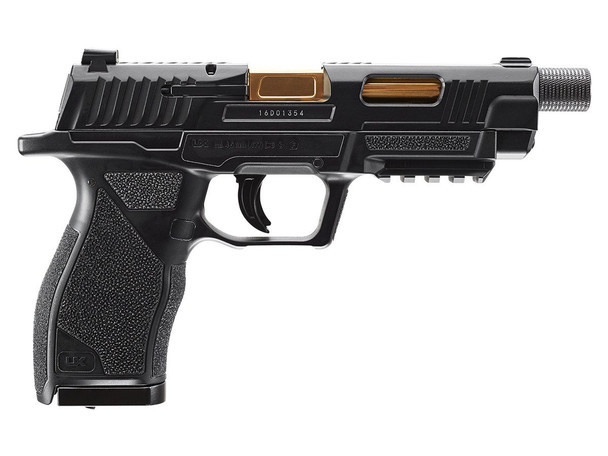 Modern action pistol design is captured in the Umarex SA10 air gun. Its slide has a full functioning blowback action, meaning it physically cycles or moves with every shot fired. The dual ammo SA 10 fires either BBs or pellets up to 420 feet per second with handgun expected accuracy due to its rifled barrel. This Umarex gun is unique from other BB guns in a couple of ways. First, its magazine holds both the 12-gram CO2 capsule and an 8 round rotary clip and it also holds three additional clips that makes fast target shooting more fun. It also has a slide that is ported on the sides to reveal a gold-look barrel that matches the gold breech block, a look thatƒ??s unique to the Umarex line but not dissimilar to some custom guns. The SA10 has an under-muzzle accessory rail and tactical sights that round out this handsome handgun and its muzzle is threaded to accept a faux suppressor for an ultra-cool look.

MSRP:
Now: £130.00
Was:
The Umarex C·P·S is an inexpensive entry-level CO2-powered pistol, but it does not compromise on precision.The quick-action magazine makes changing the 12 g CO2 capsules a breeze. The frame has a

MSRP:
Now: £185.00
Was:
The Umarex Beretta M9A3 CO2-pistol with blowback-effect and metal slide was designed with the newest version of the US-military sidearm as role model. On first view like the famous Beretta M92, the...