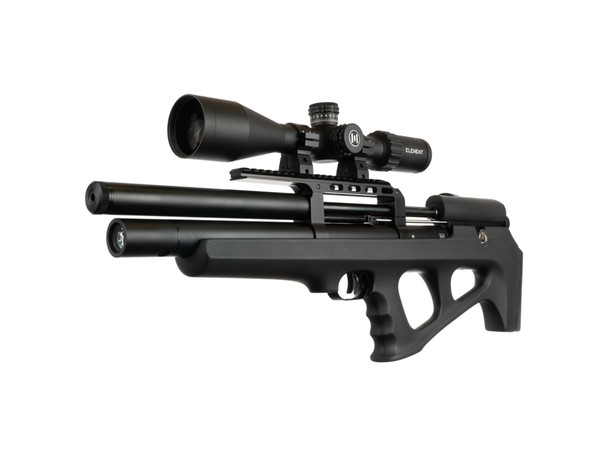 The new FX Wildcat is a part of airgun royalty. A rifle that was compact before compact became a buzzword in airguns. A perfectly balanced and ergonomically designed bullpup that defined the generation of bullpups that have followed in its footsteps.

The FX Wildcat MKIII enhances its legacy as it updates this desired platform for the modern airgunner. The improvements start inside the Wildcat’s main block. FX has increased the plenum size and air flow of the rifle while also increasing the valving of the Wildcat. The engineering into the new Wildcat block really pushes the boundaries of what can be accomplished with precision CNC engineering.

Adjustments to the Wildcat MKIII are built around the new rear power adjuster.  This power adjuster is a breakthrough as it allows for both micro and macro adjustments using the same dial to the hammer spring. The rear power adjuster has 7 presets for your hammer, but the actual hammer tension can be adjusted more fully higher or lower using an Allen wrench through a hole found on the 8th position of the adjuster. This allows the Wildcat hammer to be fully adjustedin harmony with the AMP regulator to allow for the full range of adjustability found in other FX rifles like the FX Impact & FX Crown. This also allows for shooters to swap calibers quickly and easily (additional barrel kits will be available).

The Wildcat MKIII has also upgraded its magazine to allow the use of larger capacity magazines. No longer restrained to 8 shots, the Wildcat MKIII now more than doubles its shots using the FX Side-Shot magazine (the same magazines as found on the FX Crown and FX Dreamline). All Wildcat MKIII rifles and barrel kits will ship with FX’s recently released new Superior STX Barrel Liners. The liners are housed in the STX Interchangeable barrel liner system that allows users to switch to the Superior STX Heavy liner if they want to shoot heavier slugs. The other features of the Wildcat remain intact. The externally adjustable AMP regulator, two stage adjustable trigger (easily one of the best triggers found on any bullpup), and the smooth side cocking lever perfectly positioned above the trigger.

*Scope and man not included

*Images shown have the optional picatinny rail, rifle fitted with 9-11 dovetail as standard

MSRP:
Now: £53.99
Was:
This DonnyFL FX Wildcat Shroud Extension is for shrouds that sits behind the lower air tube. This extension will replace the OEM extension but will have a 1/2 x 20 UNF adapter for you to screw...

MSRP:
Now: £53.99
Was:
This DonnyFL FX Impact/Wildcat Adapter is for Impacts and Wildcats that have the M20x1 male threaded end. It will screw onto your factory shroud and allow you to screw on an LDC with a 1/2...

MSRP:
Now: £53.99
Was:
These DonnyFL FX Wildcat/Royale 400/500 Adapter are for Wildcat shrouds that extend past the air tube and has female threads once you remove the front shroud cap. It is also compatible with FX...