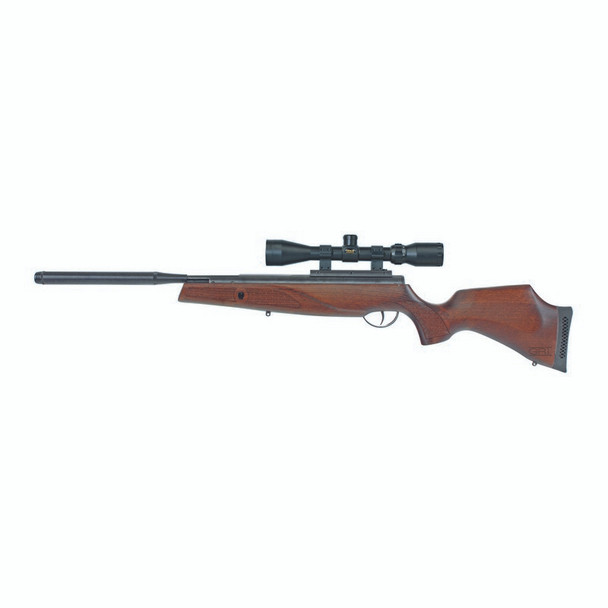 For years, air guns have been powered by a metal main spring which when compressed and then released produces the energy to propel the pellet down the barrel. Now, BSA have taken their top selling model the Lightning with it SE refinements and powered it using a different "engine" - a pneumatic ram filled with inert nitrogen. This is Gas Ram Technology.

The GRT Lightning XL SE has all the new and improved features that its spring-powered sister has. A new two-stage trigger gives a crisp release with minimal pressure. A new stock has been designed with attractive chequering at the key touch points of fore-end and pistol grip. A slim-line silencer encases the barrel and reduces the sound of muzzle blast, whilst a ventilated butt pad ensures comfortable contact with the shooter's shoulder.

An addition to all these features the gas ram provides further benefits that enhance the shooter's experience. The gas ram does not vibrate when discharged resulting in less gun movement when the trigger is pulled; the pellet exits the barrel at a faster speed resulting in better accuracy; the gas ram has a greater life expectancy than a spring with less likelihood of performance deterioration through metal fatigue whilst the cocking action is smoother and more even.

MSRP:
Now: £299.00
Was:
The BSA Lightning XL provides all the power and accuracy that has made the Lightning a legend, and now it comes with refinements to match.The XL's stock comes fully chequered at the grip and...

MSRP:
Now: £299.00
Was:
Total practicality for hunters comes courtesy of the BSA Lightning XL Tactical, the sensational new addition to the BSA family. All the power and performance of the Lightning XL in a super-durable,...

MSRP:
Now: £599.00
Was:
The new BSA Scorpion SE redefines the hunting carbine and moves the sporting rifle standard to a new level, giving serious shooters a package of features they could previously only dream of. With...