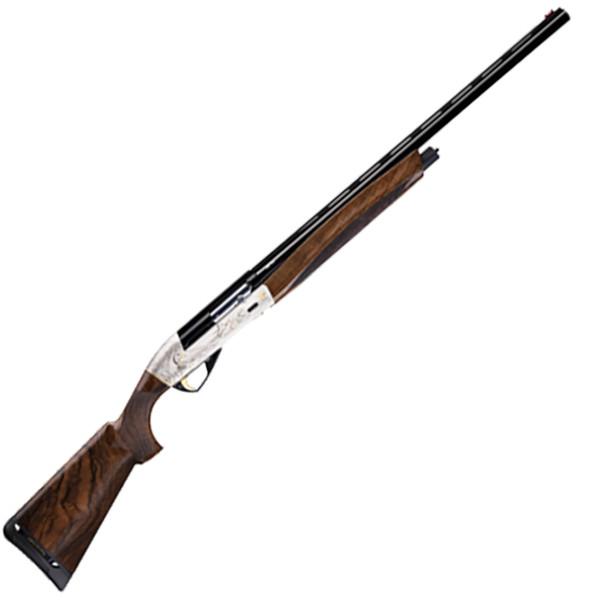 The Raffaello Accademia is an exclusive limited series produced in 1000 units. The exquisite engraving is the result of the collaboration between Benelli and Urbino's Academy of Fine Arts. Through the studies of young artists, we have managed to synthesise the greatest elements of Italian heritage, regional culture and innovation. All this is expressed in the image on both sides of the firearm, constructed and conceived as a single great work capable of rendering both the front and the back of the scene to the observer. This shotgun's technology is further enhanced by Be.ST technology, the exclusive finish that gives the barrel an elegant total black colour.

The cleverness of the Benelli System lies in the rigor of its design, constructional simplicity and ease of maintenance. There are three main components: the bolt, that acts as an inertial mass and slides freely along guides made in the sides of the receiver, the locking head and the large free spring, mounted on the bolt.Its operations is ingenious and efficient. While the bolt assembly moves into the firing position, the locking head pin movesalong a shaped guide inside the bolt to engage the locking head.When the trigger is pulled, all the components of the shotgun,with the exception of the bolt, move backwards. At the same time,the inertial spring is compressed between the head of the bolt and the body of the bolt itself. The cartridge drop lever rises to allowthe cartridge to move from the magazine to the firing chamber.Towards the end of the recoil cycle, the pressure inside the chamberreaches a safe level and the backward movement of the shotgun slows down. Then, the heavy inertial spring pushes the bolt assembly backwards, releasing the revolving head of the bolt and extracting the cartridge fired from the chamber, pushing it against the ejector. When the empty cartridge leaves the receiver, the energy developed by the moving bolt assembly rearms the hammer and compresses the recoil spring inside the stock. Following this, the recoil spring pushes the bolt assembly forwards, in this way raising the shell forwards into the  correct position and putting a new cartridge into the chamber. The brevity and ease of these movements together with mechanical precision and constructional simplicity guarantee an operating cycle which will not alter or jam, offering maximum resistance and extreme reliability.

The new system of progressive absorption of recoil that occurs in a gradual way based on the weight of the cartridges used. That is the true essence of comfort in the wood, a system invisible but highly sensitive.

Each barrel punched with the lily trademark is subjected to the tests of the Banco Nazionale di Prova for ammunition with steel shot. The Crio Steel Shot chokes, specifically developed with extended connection cones, guarantee maximum shooting performance and resistance to use the steel ammunition.

Benelli Surface Treatment is the exclusive Full Protection treatment that gives the barrel and breech superior resistance to corrosion, abrasion and wear. The new Benelli protection against scratches and rust in an elegant line that is totally black. Benelli Surface Treatment makes the barrel extremely hard and adds precious beauty and resistance to corrosion, without the need for maintenance with protective oil. Unlike the current coatings on the market that get scratched and become susceptible to rust, BE.S.T. technology ensures total protection of the barrel.

MSRP:
Now: £3,029.00
Was:
Exclusively designed for Sporting and Compak, the Benelli 828U Sport is based on the revolutionary Lock Plate, the unfailing closing system of 828U Platform, while vaunting a 100% Sporting DNA...

MSRP:
Now: £1,445.00
Was:
Benelli's best-selling model, the M2 is now available, in limited quantities, with a Cerakote finish. The M2 is the No. 1 choice among professional users for its reliability and durability; added to...

MSRP:
Now: £2,950.00
Was:
This version of the B725 has an entirely black receiver with a futuristic engraving on it. Calibre